Publications
Disability in Media: Sia’s Music and the Labels of Libels
Written by: Suzanna Chen
Edited by: Harvi Karatha and Anju Meyers

The media’s portrayal of disabilities has long lacked an adequate balance between outright defamation and overt partisanship: an opinion drawn from the scarcely present representations available. Perhaps this devastating dilemma of misrepresentation versus non-representation was what made me initially excited for the film debut of Sia, the well-celebrated singer of “Chandelier” (who described her film’s intention as “trying to show love for all of the caregivers and all of the people on the autism spectrum”).

How did this supposed “love letter” to the autism community become the glittery galore of ableism and insensitivity on my laptop screen?

Even from the first few seconds, Music’s trailer has sent me grimacing from its overstimulating colours and music—a combination inconceivably horrific to one with sensory processing disorder (SPD), a common condition in people with autism.

It is almost incredulous how a video that’s less than two minutes long can trigger emotional and physical discomfort of such magnitudes when it was—according to the singer in her since-deleted tweets—made after she “spent three f*cking years researching” with “[her] heart [always being] in the right place.” 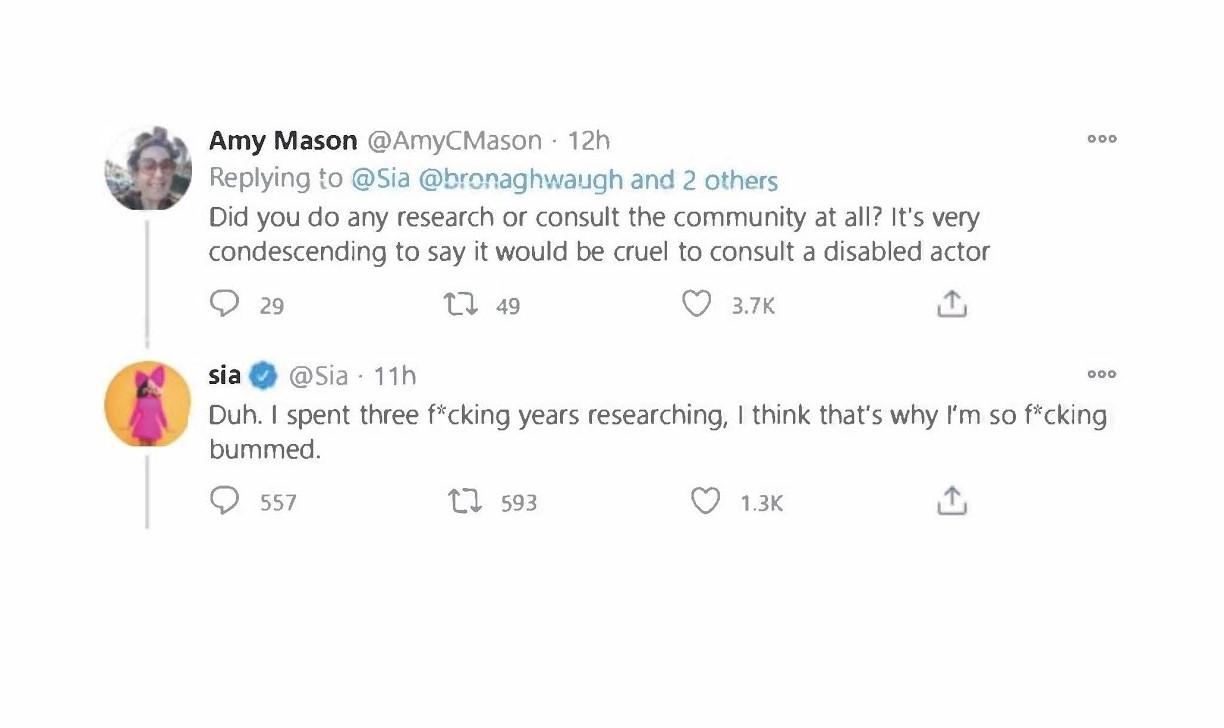 However, every single second of controversial production indicates an unfortunate fact: intention does not excuse ignorance and unintended harm.

The Issues with Music

“I describe this movie as ‘Rain Man: The Musical’ but with girls,” proclaimed Sia with unsubstantiated confidence in her notorious Variety interview. In the interview, the host compared non-verbal autistic people to objects: “[there’s] this person who can’t speak, she might as well be an inanimate object like a wig...”

In summary, the arguably unwatchable film centres around how the sudden responsibility of providing guardianship to Music, a non-verbal autistic girl, has drastically improved the troubled life of Kazu, who struggles to recover from substance abuse.

Even from the plot, one can argue that the role of autism in this film constitutes ableism as it portrays autistic people as magical vehicles of healing for neurotypicals rather than people with individual purposes. While such a narrative indeed resembles Rain Man, it seems reasonable that the autism community was expecting better from a film made more than 30 years later.

Focussing on the characters, a non-verbal girl is inarguably one of the most misunderstood identities, and Music is undoubtedly a failed attempt to portray it. Some within the autism community regard it as wrong to cast non-autistic actors as autistic characters due to representation issues, while others think such casting is acceptable with the prerequisite of adequate research.

Music neither cast an autistic actress, nor did proper research.

Sia chose to consult Autism Speaks, an infamously discriminatory organization that has been condemned by over sixty disability advocacy groups for defamatory and exploitative practices, while producing the film. The ineptly named organization—as it does not speak for autism—centres around the wrongful ideology that autism is merely a disease to be eradicated rather than fascinating aspects of human diversity to be embraced. A disability advocate (@EmmetComix on Twitter) accused Sia of recklessness in her research reference by saying, “[if] you spend twenty seconds on Autism Speaks’ Wikipedia page, you will see [that] there is an entire section devoted to how they view autism as a disease that steals children away.” 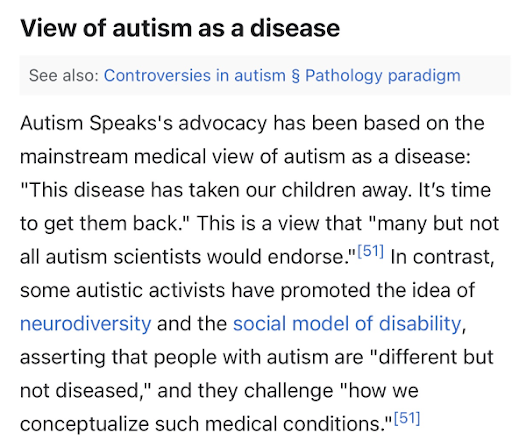 Furthermore, as the film is devoted to portraying a “female version” of Rain Man, it fails to consider the well-known fact within the psychology field that autism presents differently for different sexes. The film’s protagonist appears to be imitative of an autistic male stereotype, making it an inaccurate representation of autism in females.

Irrespective of the performance, Sia has chosen to cast Maddie Ziegler, a young dancer with whom she had collaborated for almost all of her music videos, for the controversial role. Being merely 14 years old at the time of filming, Ziegler was reportedly overwhelmed with the responsibility she was obliged to carry.

“She cried on the first day of rehearsals [...] and she said, ‘I don’t want anyone to think I’m making fun of them,” Sia said of Ziegler in an interview.

Despite this, the singer—according to what was said on the Australian TV show The Sunday Project—“‘bold-faced-ly’ said ‘[she] won’t let that happen’” and assured the teenager of her performance, which turned out to be a cringe-worthy caricature of the stereotypical facial expressions worn by autistic people.

An autistic advocate (@autisticats on Twitter) has eloquently described the performance as “deeply reminiscent of the exaggerated mannerisms non-autistic people often employ when bullying autistic and developmentally disabled people for the ways [they] move.”

Furthermore, amid the outrage aroused by such portrayal, Sia attempted to “save” Ziegler—towards whom she claimed to have a feeling of “nepotism”—by firing back equally enraged tweets. In addition to one in which she shockingly insulted a disabled actress, she insisted that an autistic actress had initially been cast for the lead role regardless of a 2015 interview during which she stated to have written the movie specifically for Zeigler. 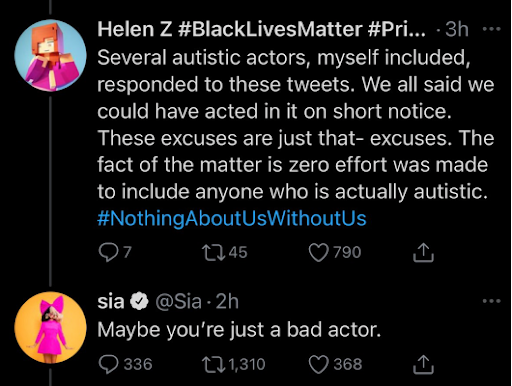 Photograph: Sia insulting an autistic actress for speaking out

It could be fairly said that her evidently avoidant responses did nothing but fueled opposing voices.

Aside from the choice of actress, another critical controversy of the film is the excessive inclusions of autistic meltdowns and how they were responded to by other characters. While perhaps it is beneficial to portray the unique struggles of autistic people with emotional outbursts, having three intense episodes in one film makes the intention questionable.

Were they included to demonize us? Or were our traumatic experiences deemed sources of entertainment?

In fact, the role of autistic meltdowns is so prominent in the film that Zeigler, according to what she had told Marie Clare, prepared for her role by watching YouTube videos of autistic children having violent episodes: insensitive footage of parents filming their children’s most vulnerable moments.

Additionally, during these on-screen meltdowns, other characters have attempted to “calm” Music down using a deadly method of restraint that has killed a 13-year-old California boy and is illegal in over thirty U.S. states. In essence, it involves movement control by having others jumping on and pressing Music onto the ground with their physical weights—or, as explained in the film, “I am crushing her with my love!”

“Music’s restraint scenes will undoubtedly cause harm to autistic people,” Tauna Szymanski, executive director of the non-verbal advocacy group Communication First, said in a press release “[because] many autistic people have experienced restraint, some will be traumatized by watching the film.”

Sia had since apologized and promised to remove the movie’s restraint scenes; the deletion has not been confirmed despite the singer deleting her Twitter account in mid-February due to the overwhelming backlash.

The Labels of Libels

While many have been referring to Music as the first film to “spark important dialogues” about disability portrayal in media, only those within the disability community can acknowledge the ever-present attempt to bring this issue to the public's attention.

“Images and stories in the media can deeply influence public opinion and establish societal norms,” stated the United Nations on the topic.

Indeed, many of the inaccurate labels “slapped onto” disabled characters shaped the correspondingly false public beliefs. The below categories summarize the popular stereotypes.

First, many publications throughout historical and modern film and literature have linked disabilities with ill-intentions and depravity, exemplified by “Captain Hook” of Peter Pan, “Richard III” in Shakespeare’s play of the same title, and the infamous “Joker” with his alleged psychiatric disability of schizophrenia. It has been speculated that such depictions are due to the public’s instinctive fear towards the diverse eccentricities of the disabled community, but regardless of the cause, these damaging misrepresentations further marginalize the already misunderstood.

Contrastingly, there are portrayals of disabled people as having—as Sia referred to autism—“special abilities.” On the surface, it might seem like an innocuous attempt to “de-stigmatize” the peculiar quirks associated with disabilities, but according to the Disability Language Style Guide, “[the] word ‘special’ in relationship to those with disabilities is now widely considered offensive because it euphemistically stigmatizes that which is different.” For instance, after the release of Rain Man, society began to idolize and expect the existence of “autistic savants.” However, doing so merely accentuated avoidance towards the condition’s disabling aspects while promoting false anticipations of extrinsic genius, undermining the immense efforts some make to achieve “normality.”

Lastly, perhaps the most discriminatory yet common misrepresentation portrays people with disabilities as victims and helpless vehicles to obtain the audience’s sympathies. From “Quasimodo” in The Hunchback of Notre Dame to “Tiny Tim” in Charles Dickens’ A Christmas Carol, the characters’ conditions—often combined with delightfully-charming innocence—are emphasized to gain pity rather than genuine compassion: an attitude often directed towards disabled people in real life.

However, while the above exemplify wrongful depictions, many were published with an honourable intention of increasing disabled representation and awareness while reflecting an attitude already more progressive than the norms of their respective times.

The same cannot be said about Sia’s Music; the courageous disability advocates who pushed for media representation thirty years ago would have been devastated by the lack of improvement present in a generation that takes pride in inclusivity.

However, it appears that with Music as our newest media venture, we are far from being able to utilize media positively regarding disabilities.

Anne Borden King, the co-founder of the autistic-led advocacy group Autistics for Autistics, has said, “[autistic] people are people, not props, and we deserve fair and equitable representation in film. The only use for [Music] is to educate future filmmakers of how not to represent a marginalized group in film.”

While King was firm in attitude when making the statement, she had arguably mistaken the purpose of the film: by snatching two Golden Globe nominations both for plot and acting, Music—in addition to being a deterrent against uneducated representations—serves as a sharp reminder for the disabled community that ableism does not only exist, but using disability as a prop in one’s “vanity project” is deserving of acclaim.

Sign the petition to stop Music from enforcing the labels of libels!

(n.d.). Disability and the Media. United Nations: Department of Economic and Social Affairs. Retrieved February 24, 2021, from Click Here for Link